Back to LAMMPS Packages for Windows Overview 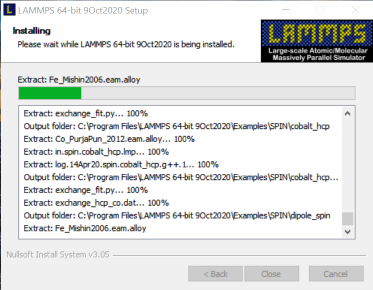 This repository is hosting pre-compiled Windows installers of the LAMMPS molecular dynamics simulation software package. The binaries are built with MinGW64 Linux to Windows cross-compilers on Fedora Linux using the standard LAMMPS sources. The LAMMPS binaries contain all optional packages included in the source distribution except:

The serial executable additionally does not contain the MPIIO and LATBOLTZ packages, since those require MPI-IO functions, which are not available without linking to a real MPI library.

Starting with the 17 February 2022 version of LAMMPS the KOKKOS package with the serial and OpenMP backends enabled is included. GPU support for Kokkos is currently not possible for these packages due to compiling the binaries with a cross-compiler.

Starting with the 24 March 2022 version of LAMMPS the PLUGIN package is included.

As of LAMMPS version 23 June 2022, we have started to provide add-on installer packages that contain LAMMPS packages as plugins. Those are separate packages because either their source code is not part of the LAMMPS distribution or uses and external library with licensing terms that prohibits linking the package into the LAMMPS executable and library directly. There are two variants of the plugin packages: one with support for MPI and one without. The corresponding LAMMPS installer packages have the PLUGIN package included and are set up to automatically load such plugins immediately at runtime as shown in the picture to the right.
The following packages are currently available as plugin installer packages:

The LAMMPS Python module (to call LAMMPS from Python) is included in all packages in a way, that it should work with a suitable Python installation of your own, since a LAMMPS shared library (i.e. a DLL file on Windows) is included. The PYTHON package (to call Python from LAMMPS) however, is only included in the installer package with Python in the name. Those packages also include a full Python runtime environment with all standard Python modules and the NumPy module since those have to be consistent with the Python library used to compile LAMMPS. Please note that the 64-bit Windows NumPy module is considered very experimental and thus one should expect crashes that are not bugs in LAMMPS.

Important Notes on Changes to the Installer packages

As of LAMMPS version 27 May 2021, the LAMMPS installer packages will detect if LAMMPS (version 27 May 2021 or later) has already been installed and will offer to uninstall, in case it is. This should be independent from whether it was 32-bit or 64-bit version and with or without MPI or Python. Having multiple versions/variants of LAMMPS installed at the same time is no longer supported. Also, the name of the LAMMPS executable has been simplified to lmp.exe in all packages since there is no longer a need to differentiate between the MPI and non-MPI version.

As of LAMMPS version 17 February 2022, only 64-bit versions of the LAMMPS installer packages will be built and provided. If you must have a 32-bit version, you need to use an older version of LAMMPS or compile LAMMPS from source. Compiling LAMMPS on Windows with Visual Studio 2022 (available cost-free as Community Edition) is supported.

Some Notes on GPU Support

These Windows binaries include GPU acceleration via the GPU package. This is achieved through compiling the GPU package in OpenCL mode and linking to an OpenCL compatible ICD loader. The included OpenCL loader library is compatible with OpenCL version 1.2 to 3.0. This means the executables do not contain any vendor provided code and should be compatible with current GPUs from AMD, Intel, and Nvidia. You need to have an HD or UHD GPU in an 8th generation or later core architecture Intel CPU for Intel GPU OpenCL support. Intel Xe type GPUs are not supported since they support single precision only. The GPU package has been compiled for mixed precision computation and as of LAMMPS version 10 March 2021 will automatically tune itself for the OpenCL capable hardware in use.

In the case of having multiple Vendor provided OpenCL runtimes installed, you may run into the situation of the "wrong" runtime being set as the default and used by LAMMPS. In this case, you may need to remove unwanted vendors from the windows registry database. Look for the key: HKEY_LOCAL_MACHINE\SOFTWARE\Khronos\OpenCL\Vendors, and remove vendors with non-functional OpenCL support. When reporting problems, please always include the exact version of the installer and the output of the ocl_get_devices tool.

These Windows binaries are built to include a shared library (liblammps.dll) and and also contain the LAMMPS Python wrapper module which is placed in a directory included in the PYTHONPATH environment variable. That makes it possible to import it into a suitable Python interpreter on Windows without any additional setup. This has been tested with the Python interpreters bundled with Microsoft Visual Studio and those downloaded from python.org but should be usable with any Python interpreter that is for the same architecture (32-bit or 64-bit x86).
This module is always included and the packages with a Python runtime include may import the LAMMPS python module from within their Python functions or classes. However, the LAMMPS installer packages do not include a Python executable for standalone use.

These Windows packages also include the LAMMPS Shell, a customized LAMMPS executable enhanced for interactive use.

Starting with version 23 June 2022 the non-MPI versions of the installer packages are also available for Windows 10 and Windows 11 using the Winget Windows Package Manager for convenient installation, uninstallation, and updates from the command line. 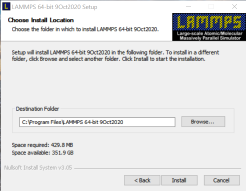 There are installer packages for 32-bit and 64-bit versions of Windows available.

As of LAMMPS version 17 February 2022, only 64-bit versions of the LAMMPS installer packages will be built and provided. If you must have a 32-bit version, you need to use an older version of LAMMPS.

The respective download directory will contain installer packages that are labeled with the date of the LAMMPS version and packages labeled as latest. It is usually recommended to download and install the latest package. Installer packages for plugins are also provided and follow a similar naming scheme. The other packages are provided in case there is a problem with it. Download the installer executable suitable for your machine, execute it, and follow the instructions in the dialogs. Both kinds of packages contain: 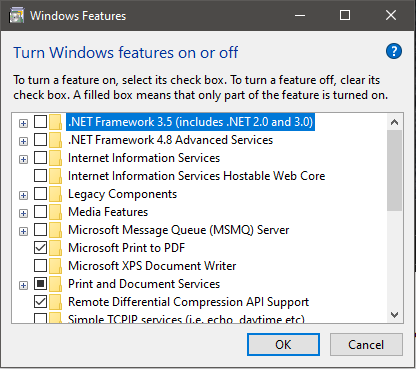 The executables will run in serial when executed directly. Please see below for instructions on how to perform parallel runs.

MPI Support for LAMMPS on Windows

To use the MPI based parallelism in the provided installer packages, you also need to install a specific version of MPICH2 from Argonne lab. This is a very old version of MPICH for Windows but it is required for these binaries.

For Windows 10 and 11 it may be required to first enable support for .NET 3.5 and older in the Windows settings dialog for optional Windows features of the Control Panel.

There are more recent versions of MPICH ported to Windows by Microsoft, but they are not compatible with the packages here. Also it is not possible to use those packages with the GNU cross-compilers. Instead to use these newer MPI packages you would have to compile LAMMPS from source on Windows yourself using the Microsoft Visual Studio 2022 software. We do not provide precompiled packages created natively on Windows because fewer packages support it and the process of building such packages on Windows has not been sufficiently automated and tested.

The installer packages listed above will install LAMMPS into a user's personal storage area and thus it cannot be used by all users. This behavior was changed with the stable release of LAMMPS in October 2020. Installer packages from previous LAMMPS versions and current versions that require administrator privilege to be installed can be found their own download area. The content is otherwise the same, only the packaging is different.

LAMMPS is a text mode program, so you have to click on the Command Prompt entry in the windows start menu, launch the Windows Power Shell, or simply execute the command cmd from Start -> Run. The LAMMPS manual and the colvars reference manual in PDF format are linked from the start men, also references to open the file system browser to view the Benchmarks and Examples directory tree. The PATH environment variable is automatically set by the installer, so that the bundled executables from everywhere in the system. Also the LAMMPS_POTENTIALS environment variable is preset to the folder with the bundled manybody potential files, so they do not need to be copied into the respective working directory. 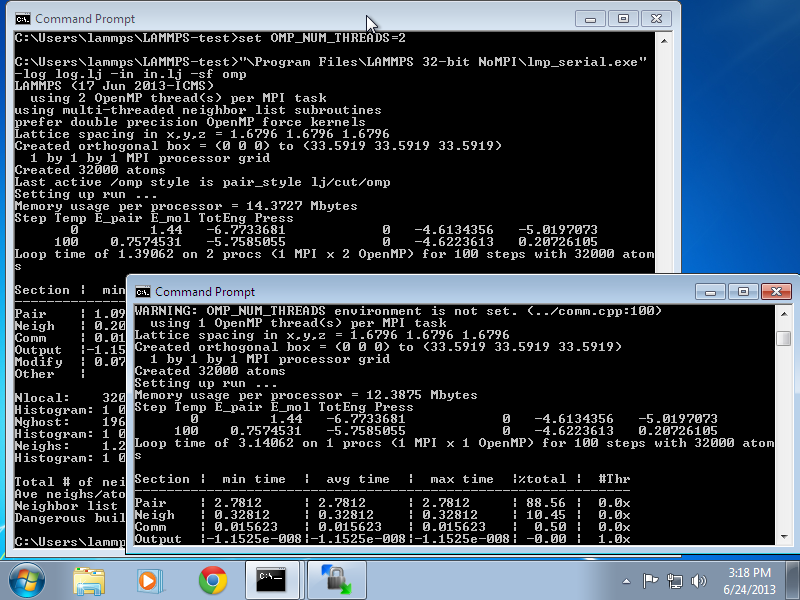 To run a LAMMPS simulations please open a console window as outlined above and change to the directory with your input script and then run lmp as described in the LAMMPS manual. For more details and additional command line flags, please check out the LAMMPS Manual.

All LAMMPS binaries from this repository support multi-threading via OpenMP, however by default only one thread is enabled. To enable more threads, e.g. four, you need to either set it at the command line prompt via set OMP_NUM_THREADS=4, via the -pk omp 4 command line flag, or via the package omp 4 command in your input script.

After enabling the use of multiple threads, you also have to select styles in LAMMPS, that are multi-thread enabled. Those are usually identified by the /omp suffix. Those can be selected explicitly and selectively, or with the suffix command or - most conveniently - via using the -sf omp command line flag to the LAMMPS executable.

Only the executable from the LAMMPS-MPI packages supports parallel execution via MPI (which can be combined with OpenMP multi-threading). For that you also need to install a specific version of MPICH2 from Argonne lab linked above. The installer does not contain it and does not check for it. Please note, that you need to download a very specific (and rather old) version of the MPICH package, as this is what LAMMPS was compiled with and the latest available Windows binary version compatible with the GNU compilers used to compile LAMMPS.

After the installation of the MPICH software, it needs to be integrated into the system. For this you need to start a Command Prompt in Administrator Mode (right click on the icon and select it). Change into the MPICH2 installation directory, then into the subdirectory bin and execute smpd.exe -install.

MPI parallel executables have to be launched with mpiexec -localonly # lmp ... or mpiexec -np # lmp ... with "#" being then number of parallel processes to start. For the latter you may be asked for your password.

Known Issues: while running in MPI parallel mode any output to the screen is block buffered and not line buffered as usual. That is, output will not show up immediately, but only after a certain amount of output has accumulated. This is done for efficiency reasons. Multi-threaded parallel or serial runs are not affected. Also when running under mpiexec, you should not use multi-threading since MPICH restricts processes to a single physical CPU thus it will run less efficient.